The conference was divided into two phases:

The first intervention was by Bruno Scazzocchio, coordinator of the Commission which organized the conference.
At the beginning of his speech Bruno pointed out that politics means meeting, discussing, making proposals, but also honoring one’s commitments : so in the coming months the Commission will check whether the proposals made during the conference were actually put forward by the Zingaretti administration.

Bruno then illustrated the work of the Commission in recent months, activities which  focused around a kind of “magic triangle”:

Good training produces research. Research gives birth to innovation. Innovation in turn generates new training.
The Commission is working to develop this virtuous circle focusing especially on Lazio and small and medium-sized enterprises – SMEs – which often are not equipped to face the new challenges of globalization and are badly in need of support to bring forward the process of innovation.
Bruno finally recalled the commitments of the Zingaretti Administration to employment, among them the “Garanzia Giovani” (Youth Guarantee)  initiative  and the strong commitment on active policies for work, an integral part of the reform of the “Jobs Act” and to support and replace who have been made unemployed.

In her speech Lucia responded to the observations and proposals  reached by the 5 working groups.
In particular Lucia said she was in favor of:

Lucia finally talked about  the problems connected with the reorganization of “Jobs centers” even after the redefinition of the roles of State and the Regions.

Lorenza thanked all those present and in particular those who organized the conference giving an example of “good politics” even more necessary today in the face of corruption and criminal infiltration such as in “Mafia capital” scandal.
Politics and the country are rebuilt, according Lorenza, focusing on “ideas and proposals”.
The “Jobs conference”  of PD Lazio is undeniable valuable because:

According to Lorenza the task of the parties, even in regional forms, is “to create places of thought, reasoning, and finding practical solutions” by linking politics with enterprise, research and the cultural world. 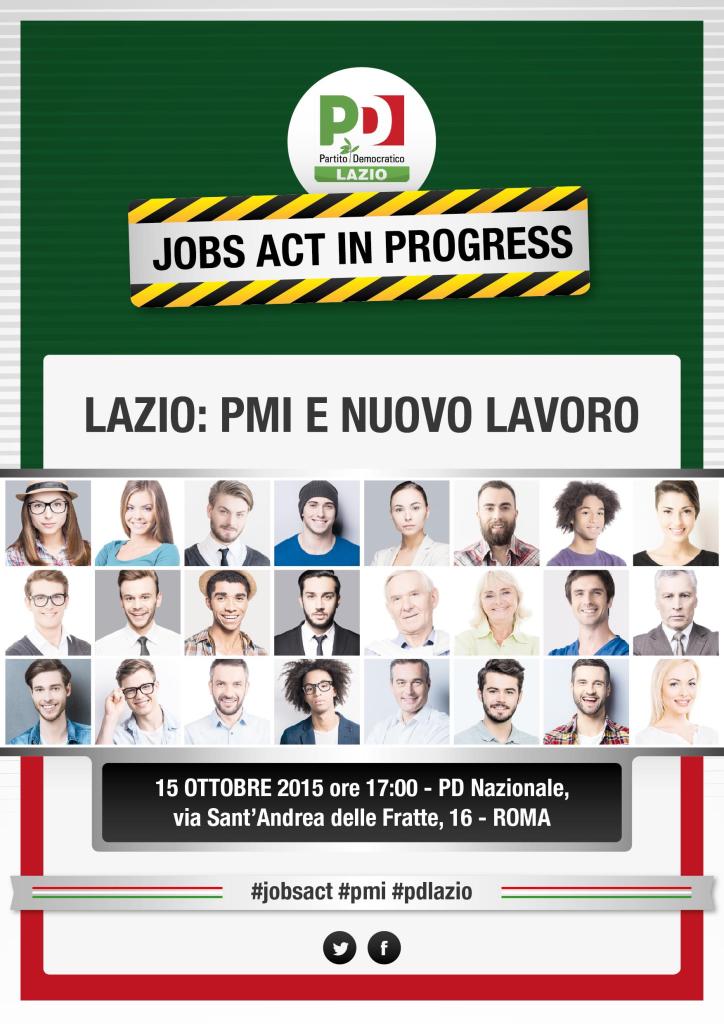 The secretary of the Democratic Party of Lazio made a speech with a strong political message claiming that the Democratic Party has recently been very active in making new proposals thanks to the innovative organization adopted.
In March 2015, the Lazio Democratic Party decided to inaugurate a new way of doing politics, radically renouncing the classic forms of organization.
Thus in recent months, the regional secretariat has been dissolved and 10 Commissions have been established in which administrators, members of the party and citizens can participate.
They have been a growing and also unexpected success both in quantity and in terms of quality of the proposals.
Today the Commissions  and “working groups” amount to 14 and involve more than 300 people including MPs, councilors, regional and municipal administrators as well as members and supporters of the Democratic Party.
This is especially important because the Democratic Party is “a government force” and therefore should not only draft proposals but also know how to translate them into concrete policies and responses.
“This is even more necessary in the world of work,” said Melilli also to “be of help to our administrators who often work in isolation.”
Melilli concluded his speech expressing the hope that at last “the times of idle chatter are over and finally we can act”.

Renato Giallombardo, coordinator of the commissions of the PD Lazio

Renato is the coordinator of all the 14 commissions and working groups of the PD Lazio.
He described the aims of the Commissions  and announced the publication of their first political proposals and projects by the end of the year.
Renato then described in detail the activities of the Commission “Economic Development” which he directly coordinated and which was formed to prepare proposals on the economic development of the regions of Lazio through the identification of  regional “territorial vocations”.